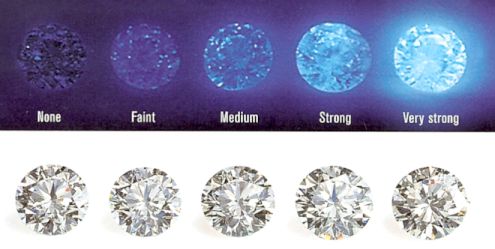 The diamonds on top are shown with an ultraviolet lamp, the ones below in normal lighting conditions.

GIA did a study on fluorescence and had everyone from gemologists to consumers look at and judge the appearance of diamonds with fluorescence. Based on their study, it had very little to no affect on most diamonds. In certain lower color (H and below) diamonds, fluorescence actually made the diamonds look whiter. This is in direct opposition to the belief that fluorescence is bad. You can be use this knowledge to get a great deal on a diamond since the presence of fluorescence will both lower the perceived value of a diamond.

Fluorescence is actually made up of two separate grades, an intensity (from None, Very Slight, Slight, Faint, Medium, Strong, to Very Strong) and a color (most often blue, in rare instances yellow, white, or another color). That being said, when looking at the fluorescence of a diamond, the intensity is the most important factor.

As stated before, there are instances in which fluorescence can negatively affect the normal appearance of a diamond. The effect can best be described as 'cloudy, hazy or oily' and it will appear in certain diamonds with a fluorescence intensity in the ranges of Strong to Very Strong. Luckily, this very rarely occurs (in less than 1% of diamonds with fluorescence). Depending on taste, certain individuals even express a preference for a diamond with Medium to Strong fluorescence, so long as the hazy effect is not present.

The bottom line is that fluorescence isn't something that you need to be afraid of. There is a widely held belief, even among those in the diamond industry, that fluorescence is "bad" and should be avoided. When you have a look at diamonds, make note of the fluorescence grade, and see what you think. Chances are, you will be perfectly happy with a diamond that exhibits fluorescence.

If you have any other questions, feel free to give us a call or email and we would be happy to assist you.